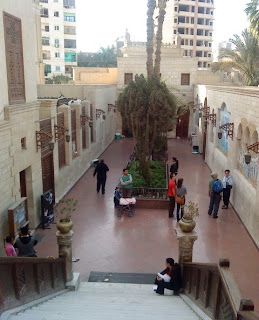 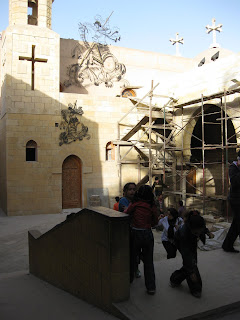 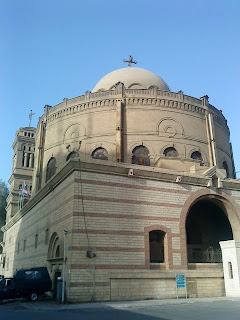 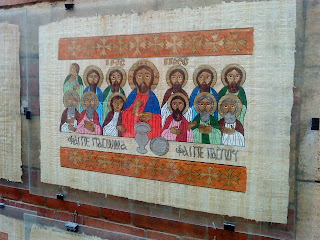 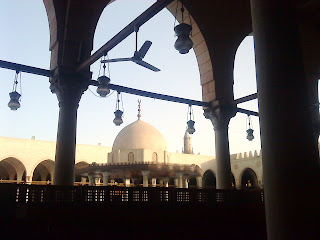 When we were almost done with our wonderful meal at Abou El Seid Restaurant, our driver "Ahmed I" called and said that "Ahmed II" will resume his duty as a driver for us instead of him. Apparently all along, Ahmed II was supposed to be the driver we arranged from Kuwait so we were like... Okay! What the hey! After paying, we called him and he picked us up.

A big guy, talkative, know-it-all kinda man, funny, and helpful! That was the impression he gave that day :-) I was happy because he seems to be more of a people's person than Ahmed I.

Ahmed II: So where do you wanna go?
Ansam: The Religious Compound or the Egyptian Museum??
Ahmed II: The Compound. You dont have time for the museum because it will close in an hour.
Ansam: Sure... lets go :-D

The Religious Compound is one of the projects to be looked at since a lot of restorations are taking place. I hope the authorities there take extra good care of the place, because its rich in flavor and multi cultured. It contains all of the three main religions; Judaism, Christianity, and Islam. The majority of worship houses were churches...

I went to The Hanging Church, passed by a Nunnery, Church of the Virgin, Mari Girgis Church, Amr Ibn Alas Mosque, and the Synagogue. Both the Coptic and Greek churches and the Coptic Museum were closed :-(

It was very interesting to be in all those places and observe different methods for prayer to the same God. Very overwhelming too. I went into a souvenir store and snapped away many pictures as well. I was so looking forward to go to all and every part of the compound, but some places were closed :-(

As I walked into Amr Ibn Alas, I put a shawl on my head, took off my shoes, and handed them to the guard. He smiled and said a little prayer for me... it was prayers time and so wonderful to be there at this time.. People were inside; some reading Quran, others preparing to pray... and he asked

Guard: Where come you from?
Ansam: Kuwait
Guard: You speak Araby?
Ansam: Yes

And he started saying how Kuwaitis and Egyptians are like one and that I should consider myself home. He was very sweet. So we go in, walk around, snap some pictures and head out...

A quick note, I usually leave my bag in the car when I am making quick stops and carry cash in all of my pockets... 20 here, 50 there, and so on. So as I was heading back to the guard to take my shoes, he asks for donations.. I put my hands in one of my pocket and was like whatever comes out of the pocket will be his... I get out EGP25 and smile while putting it in the box and he goes...

Guard: WHAT! IS THAT ALL?
Ansam: Excuse me??
Guard: You are Kuwaiti? Is that all you got to give?
Ansam: ??????
Guard: I expect much more from you! You are rich you are Kuwaiti.. EGP10 is all you got! WHATTA SHAME!
Ansam: EXCUSE ME SIR! First of all I did not hand in EGP10... and secondly I dont carry much cash with me, and dont you judge me like that!! GRRRR

I stormed out! Should I not say that I am Kuwaiti!!

When you go to museums, you are always from a poor country, and when you are in trouble, you always say you are American!

Arrggggh ! whats wrong with people! why can't they just STFU and take what comes their way ?... Shouldn't have given anything at all :X

Grey-
I dont know what he was thinking!!! I swear

Never ever say that you're Kuwaiti! Cause apparently all Kuwaiti's are gazillionaires and we just walk around throwing money to others.

Maybe I am losing my mind? I am 99.9% sure I commented on a post here! It was a random one and had a picture of a guy outside a window!! Whats happening to me?

Sorry!! I got this blog: http://alflaila-new.blogspot.com/

Mixed with yours!! I guess the first post there about the food made me think ena it was your blog! Sorry again!

I dig this religion compound thingy & just like you said, its very interesting to see them all praying for/to the same GOD.

Aside from that, that messy guard should have been ignored. You are in egypt my dear, you should have known better :P

Yess! isn't it wonderful three religions worshipping the same God? And you ask yourself why the retards still can't see it?

Same thing happened to me at AlRifai Mosque(I think its what's called) where Shah Iran is buried and King Farouq. I told them I was from Iran "Khoda Havez" and still ma salamet min el Gaurd and I only had 10Egp in my pockets(my hand bag was in car). I told him if he didn't like it then give it back!

Abdullah-
I should have ignored him... walk away, really! I guess I was so shocked and angry

Web Weaver-
It is :-) I have more stories to tell on guards hehehe
Just stay tuned


most of our money is spent on "baqsheesh"

:)... well am always feeling sorry for them and the way they live

they break my heart... though they r rude and demanding what is not for them in a very barbaric way that piss me off...


zis is egypt take it or leave it


never been to the religious compound

thanx for the info


and pls take ur utmost time with the upcoming egypt posts

chandal/danchal!!
LOL... yeah I feel sorry too
I hope you get to go next time you visit.. its a nice place... and I am taking more than long to finish it hehehe... Gracias