The European Commission has just announced an agreement whereby English will be the official language of the European Union rather than German, which was the other possibility.

As part of the negotiations, the British Government conceded that English spelling had some room for improvement and has accepted a 5- year phase-in plan that would become known as 'Euro-English'.

In the first year,'s' will replace the soft 'c'. Sertainly, this will make the sivil servants jump with joy. The hard 'c' will be dropped in favour of 'k'.. This should klear up konfusion, and keyboards Kan have one less letter. There will be growing publik enthusiasm in the sekond year when the troublesome 'ph' will be replaced with 'f'. This will make words like fotograf 20% shorter.

In the 3rd year, publik akseptanse of the new spelling Kan be expekted to reach the stage where! More komplikated changes are possible.

Governments will enkourage the removal of double letters which have always ben a deterent to akurate speling.

Also, al wil agre that the horibl mes of the silent 'e' in the languag is disgrasful and it should go away. 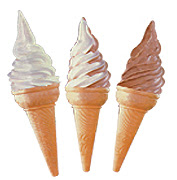 My friend called me earlier and asked me if I was up for soft ice cream! Knowing me, of course I was up for it.

We have been loyal customers to Rawda Co-op Branch, in block 3, sweet store (I think its called Château de Cadeau) for few years now. I would park my car and the sales lady would prepare my soft ice cream cone and have it ready as I walk in (holding my KD 0.250 note), just as I like it... mixed (half chocolate and half vanilla)... that is when the store is not packed with customers of course.

Fatima Bhutto (Benazir's niece) complains about the mambo jumbo about her aunt saving Pakistan and how wrong it is that the media is strongly showing support to her! She write about it in the LA Times - November 14 (to read the article click here).

I strongly believe that Benazir is gaining support from the media being a Muslim female that is in danger from all the extremists there... that is because the media shows Muslim females as hopeless and helpless in many cases! They ignore the fact that she is hated because she is guilty of corruption and not because she is a rebellious female trying to save Pakistan (Lets not forget the fact that she has been PM twice before so its nothing against females in Pakistan.. Seriously)!!!!

Well... apparently its common for people in the world of politics (and life as a whole) that if someone's popularity goes deep down they do an act or two... just so they gain it back!
Posted by Ansam at 10:17 AM 6 comments:

This girl is SO ADORABLE! Check out her videos

OK this is my new addiction... I have been on it for the last few hours LOL
Check out this link Face of the Future.

do you know any other sites for morphing and age progress?
Posted by Ansam at 11:31 PM 8 comments: 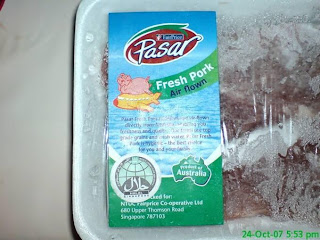 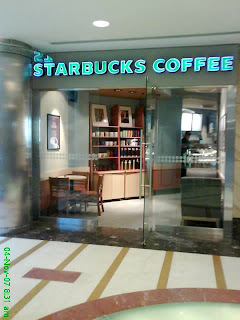 Yaaaaay! Finally, Starbucks opened! Not that they have the best coffee in the world or anything... but its a nice site and I now can have coffee/tea at work from a decent place! Yaaaay
Posted by Ansam at 5:21 PM 15 comments:

Facebook is an interesting social network. I happen to be new to it (compared with a lot of people I know who kept asking me to open an account :-P). I have got in touch with people I knew from long time ago, and still meeting people... though I set the red lines (the lines I am not supposed to cross) and follow my own set of rules. I know this might seem so "old fashion" to many of you, but its a slim chance-to-none that I accept friend requests from people that I dont know.... but, and yes there is a BUT here, I accepted a friend request from what seems to be this nice young and annoying girl. I have never heard of her in my life, and she is like 9 years younger than I am who strongly believe that I used to be her classmate!

I tried to explain it to her but she wrote on my wall (the wall, if you're not familiar with the Facebook, is a personal space on each person's profile where you find a lot of posted messages from your friends)... back to the subject, she called me idiot on my wall!!! That kinda ticked me off but still I didnt bother to say things back because I really am not in a state of mind to argue about such silly things in life! So I just ignored her, and then she sent me a personal private message asking me if I was a student at this "X school"....

To make things clearer.. because I thought it was a prank played by someone I know, I went into her profile and checked out her friends' list. Turn out that we share a friend. I messaged my friend and asked her if she knew who this girl is, but she didnt knew who she was either...

This doesnt end here! So this girl who claims to be my classmate gives me names of people (full names) that used to be in our class. I didnt doubt myself for a moment but checking on her friends' list I came across one of the names she told me about, so I messaged him and he doesnt know her either "SURPRISE!" heehee. So he tells me lets play a prank and tell her we were her classmates.... I have to be honest I liked it at first, but its old school! So she keep asking me questions and giving me more names and birthdates (YES I KNOW too may info) till I was like WOW THIS THING HAS TO STOP NOW! I come clean and I tell her.. I am not who you think I am, I never went to the same school, I dont know any of the names you are giving out, I am almost a decade older than you so I cant be your ex-classmate....

I dont want to be rude or anything... but should I just block her or try to make peace and be Facebook friends? I dont like the added stress in my life! Arghhhhh! I have no idea if she really went on giving my full name to people on Facebook LOL not that it matters but what is freaking me out even more that she is still messaging me as I am writing this post!

Lets be positive and look at the bright side here... I gained a friend, her! Well maybe!!! I got a good laugh from this Kuwaiti guy who seemed nice and I dont believe he did go for the prank either, and I am having a good laugh at the situation as a whole!

Thanks YoYo
Posted by Ansam at 2:57 PM 6 comments: