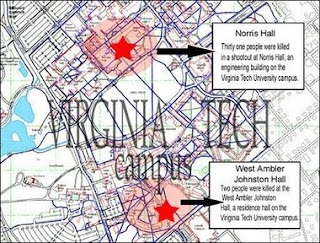 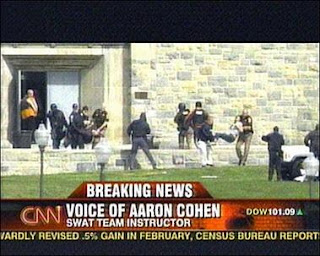 This is really sad!!! Since Coloumbine.. making some sort of "chain of tragedies" grow bigger with time! (Images above from AFP and CNN)

I have read so many things on the net/newspapers.. and summarized it here on the blog...

This must be the cruelest and deadliest civilan shooting in the history of USA!

The shooting started somehere around 7:15AM in the dorms followed by another one in a class room a couple of hours later, but it is not yet confirmed that the two shootings are related!!

The news at the moment is so mixed-up! On one hand, the Daily Mail, a British Tabloid, reported that the dorm shooter have quarreled in the dorms with his girlfriend who has been seeing another man! On the other hand, the Washington Post reported that the shooter was not the boyfriend, but rather someone else!!! When the advisor was called to sort out the dispute, the killer got out his gon and shot both; the girlfriend and the advisor.

It is said that his friends detained because everyone can recognize them as the shooter's friends!

Later in the day, the shooter (if its the same guy) went in rampage and vent his rage by shooting about some 20-30 people attending a German class, including the teacher. It is said that the shooter peeked in a couple of times before he started to shoot.. like he was looking for someone. Allegedly, the shooter then shot himself in the head and dropped dead! Why! Is killing all those innocent people will bring his love back! Is he blaming the whole world for his misfortune in life and love or what!!

I am just wondering what the shooter did in the two hours he had in between shootings!

The following summary is just a copy/paste from the net:

Monday, April 16
7:15 a.m.: A 911 emergency call to Virginia Tech Police reports a shooting at West Ambler Johnston Hall, leaving two people dead.
8:00 a.m.: Classes begin.
9:00 a.m. – 9:30 a.m.(approx.): Shooter opens fire in classroom in Norris Hall, an engineering building.
9:26 a.m.: Emails go out to campus staff and faculty saying there has been a shooting on campus.
9:30 a.m.: Students in the engineering building Norris Hall call police to report more shots have been fired.
9:50 a.m.: A third email announcing: "A gunman is loose on campus. Stay in buildings until further notice. Stay away from all windows" is sent to all Virginia Tech email addresses. Loudspeakers broadcast a similar message.
10:52 a.m.: A fourth email warns of a multiple shooting with multiple victims in Norris Hall, saying the gunman has been arrested and that police are hunting for a possible second shooter. The entrances to the campus buildings are locked.
12:00 p.m.: At a press conference, authorities said there may have been more than 21 people killed and 28 injured.
2:30 p.m.: AP reports at least 31 killed, including gunman.
3:40 p.m.: Virginia Tech confirms 22 dead.
4:01 p.m.: President Bush speaks from the White House regarding the shooting.
4:40 p.m.: The school holds a press conference with updates on the day's events.
4:42 p.m.: Virginia Tech confirms 33 dead including the shooter.
7:30 p.m.: Third press conference.
7:30 p.m.: A final confirmation that there have been 31 deaths at Norris Hall, including the gunman.